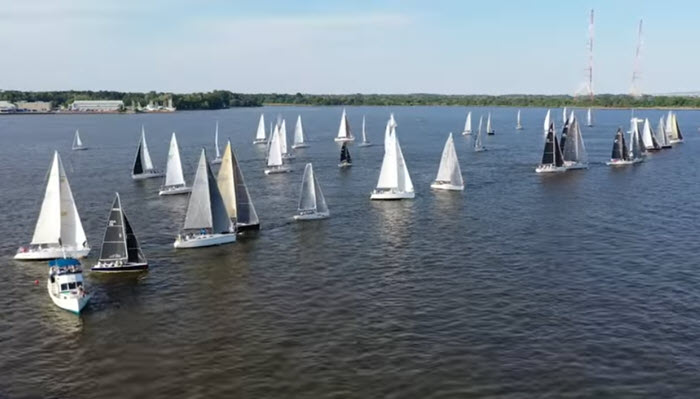 As yacht design became more focused on racing than dual purpose, the landscape of competition has pushed less nimble boats that once raced to the sidelines. But that is about to change in Annapolis, MD.

Recognizing the number of mid-Chesapeake Bay sailboat owners that would like to compete in local regattas, race officials with Annapolis Yacht Club and Eastport Yacht Club are joining forces to create new classes that will enable those boats to get out onto the racecourse.

Beginning with the 2022 season, AYC and EYC will both offer ORC scoring for cruising or dual-purpose boats and doublehanded competitors. ORC Cruiser classes along with ORC Doublehanded classes will be offered in numerous regattas sponsored by both clubs.

“There is a market that is anxiously awaiting this development. We’ve been approached by a number of people about this,” said John White, Chairman of the Annapolis Yacht Club Sailing Committee.

Annapolis Yacht Club will conduct separate seminars on January 22 to provide more in-depth information about the new offerings. Commodore Jonathan Bartlett will be joined by White and Ben Capuco, an experienced ORC competitor.

They will discuss the ORC Cruiser division and eligibility determined by ORC calculation, review the proposed 2022 regatta schedule, and provide instruction on how to obtain an ORC Club or ORC Non-Spinnaker rating certificate.

Both seminars will be held at the AYC Sailing Center (510 Severn Avenue) beginning at 10 and 11 a.m. and last approximately an hour. The second seminar will focus on the highly competitive ORC division for fully crewed boats and ORC Doublehanded class. Registrants are welcome to attend both sessions, which will conclude with a question-and-answer segment.

“We’re seeing a continued uptick in ORC class numbers, which is why the club continues to expand its offerings,” Bartlett said. “It’s a big deal that two Annapolis-area clubs are working together on this initiative. It’s exciting to see cruising and doublehanded sailors have an opportunity to utilize the ORC rule.”

Doublehanded racing becomes more popular with each passing year and many regattas have been offering such classes. Many owners enjoy the challenge of competing doublehanded, while others see it as the logical solution to the difficulty of finding reliable crew.

“There is a decided following for doublehanded racing, and it makes sense to offer ORC scoring for that discipline at many of our regattas,” said White, specifically referencing such popular AYC events such as Spring Race to Oxford, Race to Solomons and Fall Series.

Capuco said the new offerings come in response to the increased popularity of the ORC rule on the Chesapeake Bay. Owners of fully crewed racing sailboats appreciate the Velocity Prediction Program utilized by ORC.

ORC relies on its VPP computer program to individually predict the performance of each boat at every point of sail across an array of wind strengths. Ratings change based upon wind speed and the amount of upwind, downwind, and reaching time logged in a particular race.

“It’s a science-based rule that I feel is fairer and offers fewer excuses,” said Capuco, whose presentation will explain how the VPP program works, how owners go about getting their boats rated for ORC, and navigating that process through US Sailing.

“I think the big advantage of what we’re doing is that it allows race committees to score all classes under one set of rules. I’m hoping this gains momentum and clubs begin to use the ORC rule to the best of its ability.”

White pointed out that boat owners who register with ORC can request as many rating certificates as they wish. One boat could hold ORC Club, ORC Non-Spinnaker and ORC Doublehanded certificates produced from a single application. AYC is conducting the ORC seminars in January to give owners plenty of time to begin the process of obtaining certificates.

“I think the addition of the ORC Cruiser classes will enable skippers to find the right fit for racing against similar boats,” said Berry, who does not believe her boat should compete in the same class as certain cruiser-racer models. She said the Tartan 4100 performs differently depending on wind velocity and direction, and likes that ORC recognizes that distinction.

“It’s wonderful that EYC and AYC are working together to create some continuity on the requirements of this ORC Cruiser and ORC Doublehanded classes,” she said. “Both clubs are committed to developing a very consistent scoring methodology that is easy for the race committees to implement.”

Dobbs Davis, an Annapolis resident and ORC Communications Director, believes both clubs will benefit from embracing the rule. Programs such as YachtScoring make it easier for Race Officials to update the scoring parameters depending on conditions.

“The advantage for race organizers at AYC and EYC is they will now have a fair, objective, transparent and versatile system that is well-supported and sustainable in the long term,” he said.

To register for the gratis ORC Seminars being presented by Annapolis Yacht Club, click here.